Hey! It’s Yasyf, Sym’s CEO. I thought I’d take the time to document some fun weekend Okta insanity, in case it was helpful for any future netizens. If you’re struggling with the “Join All Roles” option of Okta’s AWS SAML App, this post is for you.

The catch lies in a little option called “Join All Roles”, which, if you’ve found this post, you’re probably familiar with. This annoying little option determines whether the group delegation functionality described above actually works, but the implementation is slightly baffling. In classic Sym fashion, our customer found something they didn’t understand, so we spent the day mapping out it’s behavior.

Docs to the rescue?

First off, let’s look at the docs for this option.

Select this check box to make AWS SAML use all roles.

Join all roles OFF: Role1 and Role2 are available upon login to AWS.

Join all roles ON: Role1, Role2, RoleA, and RoleB are available upon login to AWS.

Easy, right? Unfortunately, even if you followed that, it’s not quite the whole story.

Let’s start with some terminology you might see in the Okta UI:

The last one is an important, but not always intuitive, detail. Users can be assigned to an Okta App two ways: as an Individual, or as part of a Group. If the user is already assigned to an App via a Group, they cannot be assigned as an Individual until they are removed from the Group. You can see which one of these states a User in an App is by checking the “Type” column in the “Assignments” tab. 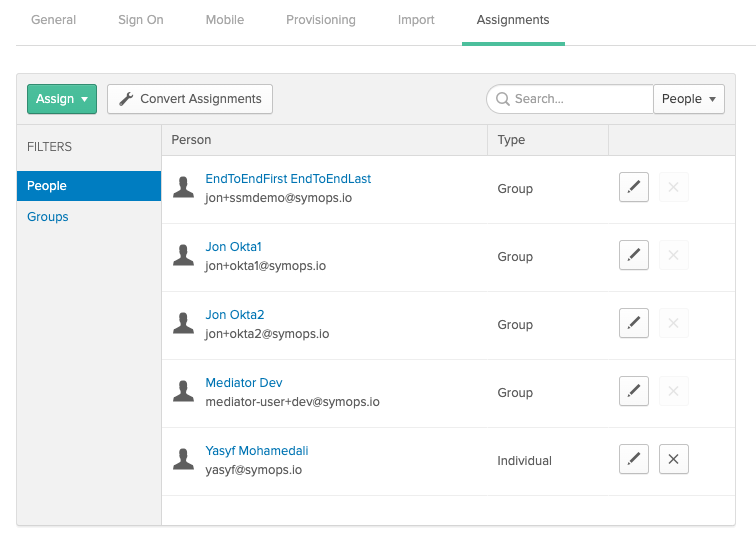 Now let’s dive into what this “Join All Roles” setting actually does!

If a User is assigned to an App via a Group, the “Join All Roles” setting appears to do nothing. Whether it is true or false, SAML Roles that are associated with the Group’s assignment to the App will be available to the User.

I hope this helped! If you’re messing around with Okta, AWS, and IAM roles, you’re probably trying to set up access controls of some sort around your infrastructure. Why not check out Sym and let us take that pain off your hands?

Hello, Sym: Announcing our Series A